Catching the trains from Cairo to Luxor

Our Experience taking the day time express trains from Cairo to Luxor return.

Egypt was great! It was our first stop on our backpacking trip around the world. We found Egypt cheap to get around and we didn't even need to use a tour guide. We visited two main cities on our Egypt leg (Cairo and Luxor) and we used Egyptian Railways for return transport which was easy and comfortable.

The time spent on the train was great for a wind down where I could get work done and take a break from the hustle and bustle of the cities. The views of farmland, palm trees and desert hills reminded me that Egypt is not just all about the cities and archaeological sites. 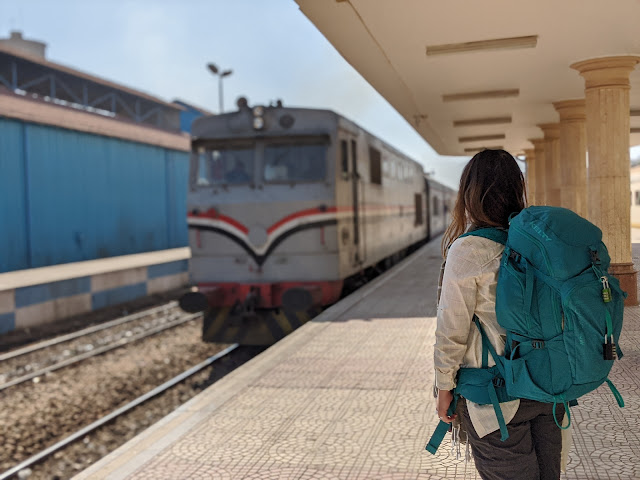 Image: Our 10:55am Luxor to Cairo train rolling in.

How we bought tickets:

We did have another option of taking the overnight sleeper train exclusively for tourists (which is apparently safer) by Watania but we both found it expensive so we opted for the day train used by Egyptian locals.

We bought our day train tickets online from the Egypt National Rail (ENR) website and the whole process was time consuming as you had to make a login first but otherwise finding the train was self explanatory.

Tip: you can only buy tickets 2 weeks before your travel date. When we tried buying our tickets earlier we couldn't even find the tickets and kept getting an error like it didn't exist.

Tip: you don't need to print your tickets out. Our ticket inspectors were fine reading the PDF tickets straight off our phones. They didn't even need to check our names or passport for ID.

Image: digital tickets read straight off your phone were ok with the ticket inspectors. No need for printing!

First Class with Air-conditioning
We rode on first class with Air-conditioning and it was comfy. Our first train from Cairo to Luxor was a lot nicer than our return train from Luxor to Cairo. We met a fellow train traveller Erik in Luxor who also travelled on the train but chose 2nd class. His feedback was that it was uncomfortable and everyone kept trying to sell him things which didn't make his ride as pleasant. 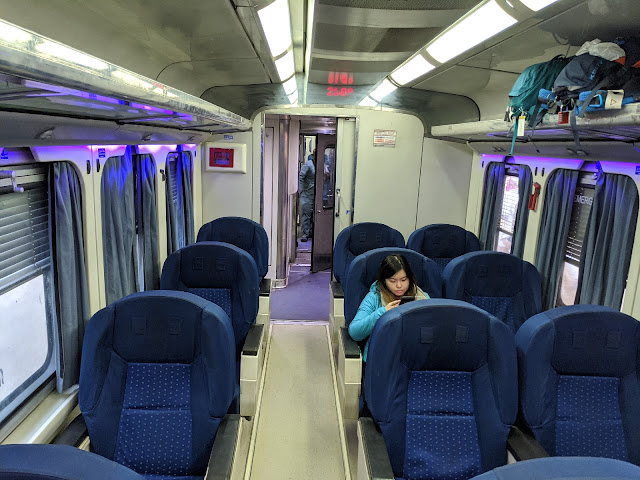 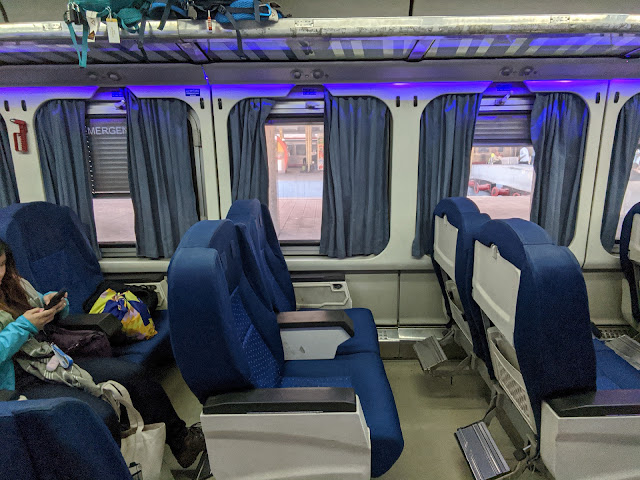 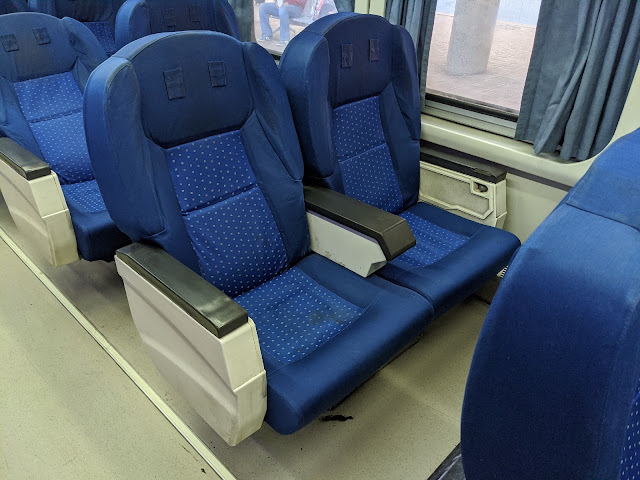 Image: These seats can also recline!

What about food?
We had breakfast at our hostel and brought snacks and water along for the ride. The snacks were enough even though the train ride was 11hours...
I did buy two Nescafe coffee sachets which costed 12EGP each.

On the platform there were food and coffee sellers. On the train itself there was a food cart but we passed on the food. 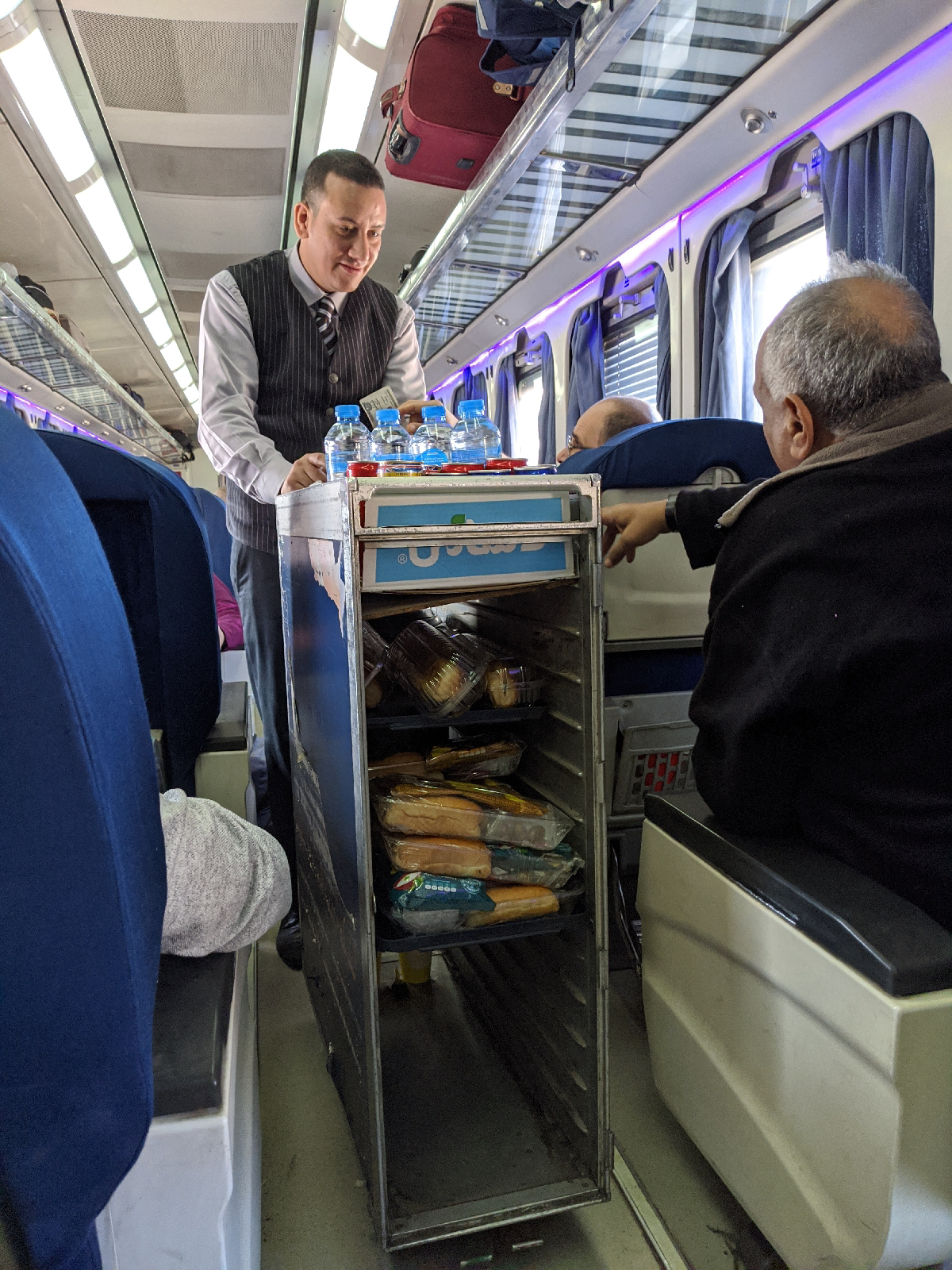 Image: This food cart passes up and down every half hour or so~

Getting to the train station and finding the platform
In Cairo we used Uber to get to the station. He dropped us off nearby and we walked the rest which was pretty straightforward. Our train arrived about 20mins before departure so if you get there early you wont have to wait too long to take your seat.

For finding the platform and carriage we just asked the tourist police and they were glad to help us. Our platform for departure was platform 8 from Cairo to Luxor and platform 1 from Luxor to Cairo. 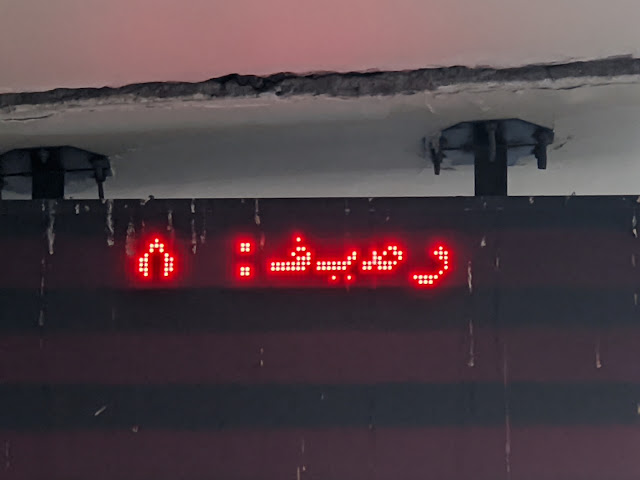 Image: LED platform numbers in Cairo was in Arabic numerals. That symbol on the left means 8. Not sure what it says after the colon...

On the train and finding your seat
We bought our tickets as a couple so we expected to be seated together but for some reason the ENR website put us in seats that were apart. This happened on both our Cairo to Luxor and Luxor to Cairo trains.

The train staff just told us to sit together and when the person with the ticket for my seat approached us the train staff helped us out.

It seems swapping seats to sit together is normal as we saw a few ticket swaps from other people. So don't fret if your numbers are apart. 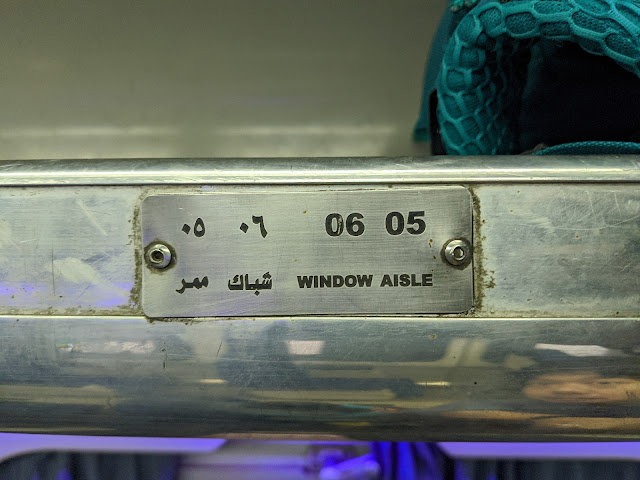 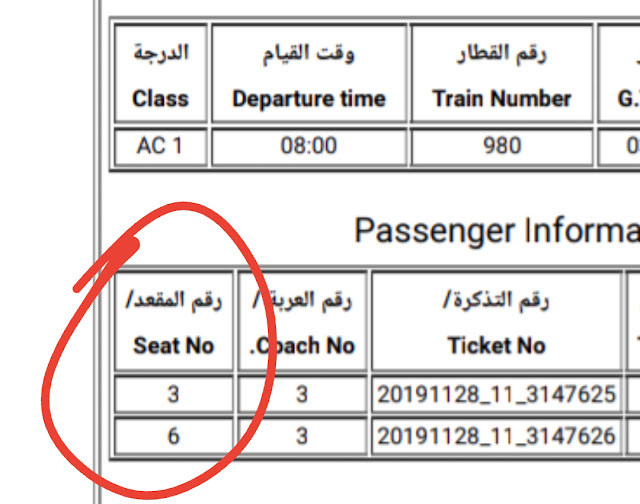 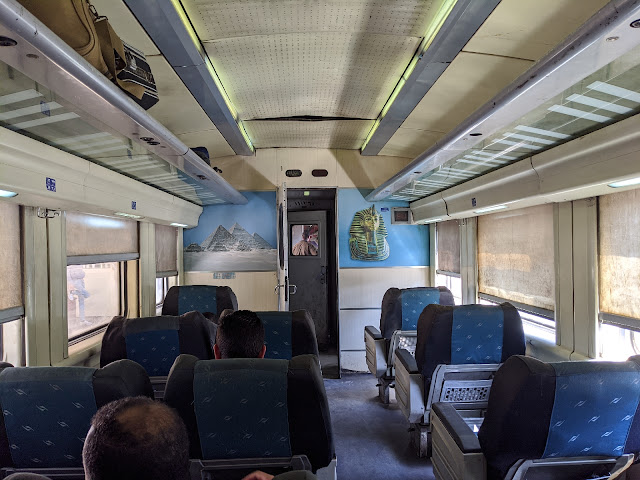 Image: Our train from Luxor to Cairo (older than the train we took from Cairo to Luxor but the Air-conditioning worked a lot better) 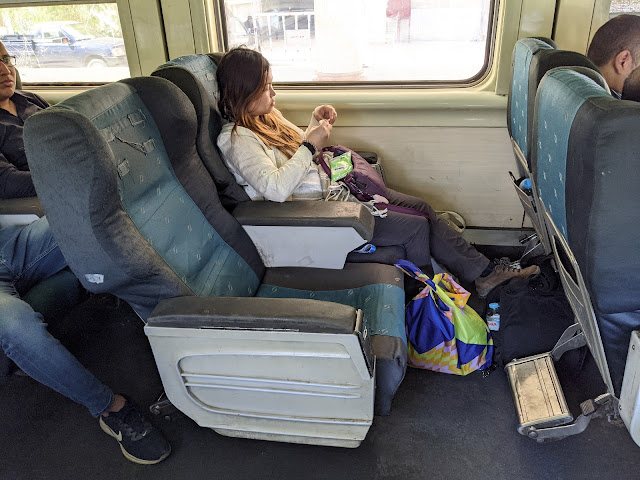 Image: Same amount of leg room but no tray table! 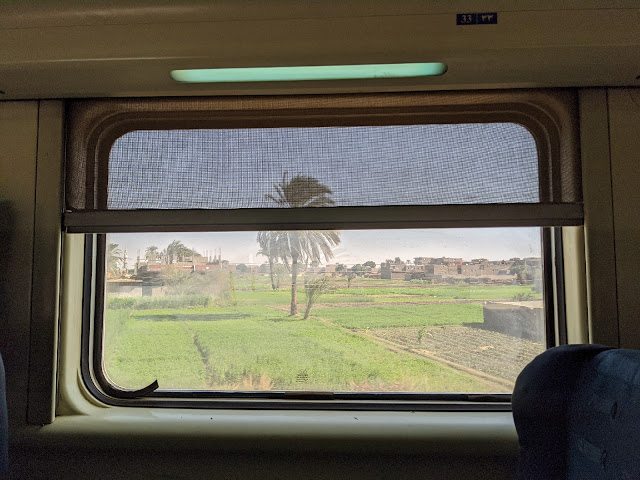 Image: typical view of farmland along the tracks

Internet and power on the train
There was no Wifi on the trains but we had local data sims and stayed connected for a majority of the trip. We weren't streaming movies so can't comment on the speed but it was fine for posting updates on Facebook etc.

There is also no power on the trains so remember to bring appropriate power banks! 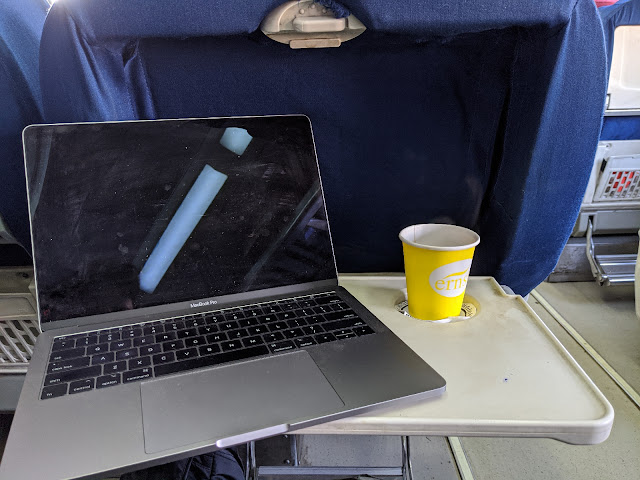 Image: I had my laptop out and felt safe as other Egyptians had their laptops as well. I didn't get mugged afterwards too :)

Important note - Have a plan of what you are going to do once you are off the train!
We arrived at Luxor station at 7pm and were bombarded immediately by taxi drivers, horse riders and hotel vendors as we stepped off our carriage and walking towards the exit. Taxi vendors and tour guides walked with us along the platform trying to find out where we are staying, some even forcing us to take their business cards or take photos of their tour prices!

Luckily, Lisa did some googling on the train and found a nearby restaurant to have dinner so we could walk with purpose. If not for that, we would've been like lambs to the wolves. 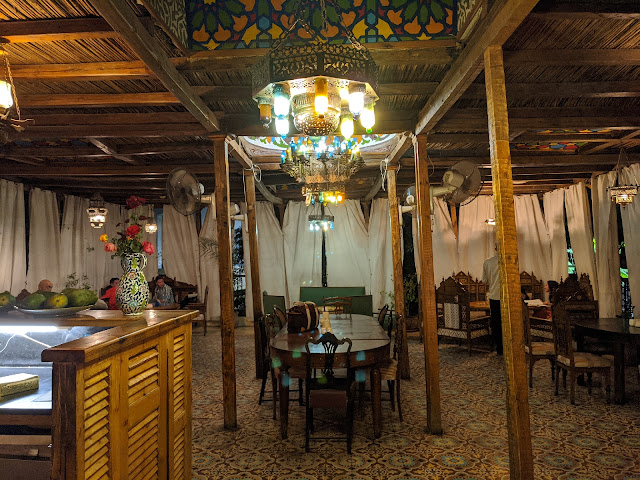 Image: From Luxor station we walked for about 10 minutes directly to Sofra Restaurant. After repeatedly saying "La Shukkran" (no thank you in Arabic) for most of the walk, arriving at the Sofra Restaurant was a rescue.

Scam alert! - Erik who also rode the same train as us met who he thought was his hostel owner at the train station. He rode with the guy to the hostel and the driver asked for the room fee in advanced. Thankfully Erik only paid the taxi fare. But watch out for this scam in Luxor!

A quick note about what day to travel
In Egypt the weekend is Friday and Saturday. Our train was Cairo-Luxor on Tuesday and then Luxor-Cairo on Friday. What we found was that our Tuesday train was much quieter then our Friday train. The Friday train was significantly more rowdy and my guess is that it's because the people were travelling to Cairo for the weekend to have a good time. Next time we'd probably try to pick two Egypt weekdays.

Website that we used to help us plan our train trip:
https://www.seat61.com/Egypt.htm 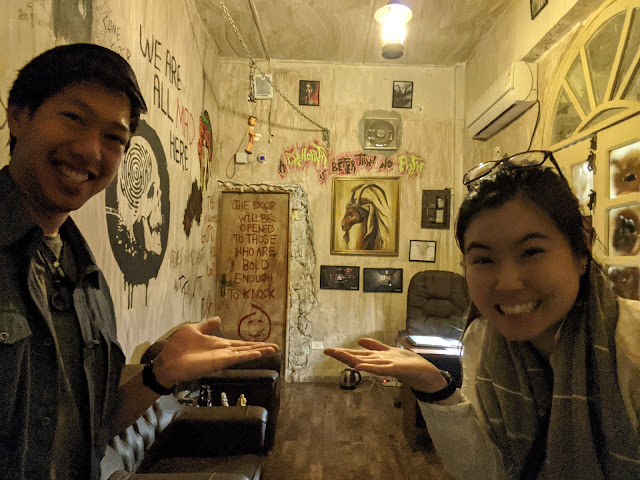